What is a Kaleidoscope? In Rekdal's new book, THE INVENTION OF THE KALEIDOSCOPE, it is a telescope of fractured identity, a symbol of the self in collision with society, history, Other. It's a refraction of the many golds of who we are at once, all of our mirrors looking at one another in a single body. It is our bodies that politicize us, give us historical and social context, and often we have to struggle to see clearly the pieces of who we are in the tides of living among others. In my last post I mentioned that this is a book of confessional reveries, odes to art and broken relationships, fruit and pornography, bodies in light and history--and they are. They are odes that wonder over Self in the variable contexts of the body.

This week I visited the Ghetty museum to see the first contemporary artist exhibit they've hosted: Tim Hawkinson's ZOOPSIA. Five pieces, each of which transform our vision of self and creature: In "Leviathon" the delicate skeleton of some sea-dinosaur is actually a spine of ascending and descending white faced rowers, each with a pair of miniature oars that look larger and smaller; his oars are ribs, the spinal cord an arching line of human-boated figures, fine chalk and bone-white. As in his other pieces, distance is the transformative power in this work. Also, our forgotten animalism. Also, Hawkinson's ability to remind us that we impose human meaning on the natural AND that we make a totem of the unnatural: as in a realistic black bat made of shrunken and melted RadioShack plastic bags. Of course, my absolute favorite is a wall-sized collage of glossy-photographs cut out and pasted onto a foam canvas: "Octopus" 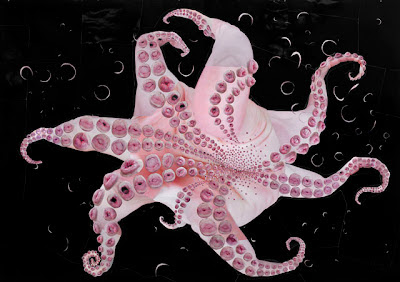 The black of the background is perfectly anonymous and the pink beast seems to float and unravel itself in a subArctic depth, which is also the depth of dream, of abstraction in the human mind. The pink of the creature is actually the palm of Hawkinson's hand and each tendril a blown up foto of his finger. The octopus itself is lined with thousands of enlarged fotos of Hawkinson's puckered mouth for suckers, some the size of a fingernail, others larger than your face or fist. There's a beastliness that is both disturbing and erotic! At first you're caught in an amazement at the strangeness of the creature, in an attraction to its alien beauty, and then you're gasping at the sheer magnitude of the mouths, that are sexually ugly and wet and reminiscent of assholes and shaved pink parts.. . It's a real shock to realize its not some strange creature at all, but something we know very well about ourselves, our hands and mouth. And then you realize that you're also a creature, made of ugly stuff, made of sexual darkness that is actually very bright. You realize that we are beings who both kiss and bite. It's a really wonderful poetry he's made, a kind of surrealism of the eye that tricks you into seeing two things at once, and one that reminds us of the violence of the body that loves and hungers, hunts (figuratively searches, philosophizes, imagines, seeks "the spheres" as Whitman wrote, "to connect them") and violently kills, murders, brutally intimate and vengeful.

Rekdal's poems are awake on what identity is--the beautiful failures of our understanding. She works through description, building a lyric intensity in each poem toward what might be called prayer, or at least something that has the same ecstatic abandon. This is not to say her poetry is without the burdens of craft. In a 36 stanza terza rima she describes visiting an installation of suits of "Armor on Display":

The woman drags her youngest daughter off the case,
pink mouth suctioned like a fish's to the glass
upon which she's puffed her lacy

lips wide open: one toothed and dribbling kiss
blown to this suit of armor on display, corrugated as tin,
shoulders steeled with scales

But it's the nightmare I'm most interested in, wanting the dregs
of battle still smeared in the dents, tufts of wood
caught in the ragged steel, tears where pegs

of iron shattered through. I want thick moons
of rust, shirt scraps clinging to the gaping neck, the deckle
joint from that arm half torn away, loose

and delicate to the touch, hanging like
a rotten tooth. Everything exposing in thought
or imagination flesh freckled

with blood, gleaming through. If it's history we want
then let's have it: its futile pomps and dust,
its boredom, gore, and desperation, the pliant

vulnerability each suit implies and would let
us enter. If death or sadness is to be shared,
I want to strip away sex and distance,

all these panes of glass and metals brightly perfected
by a renovation that haunts through being too
perfect, removed from any sensation 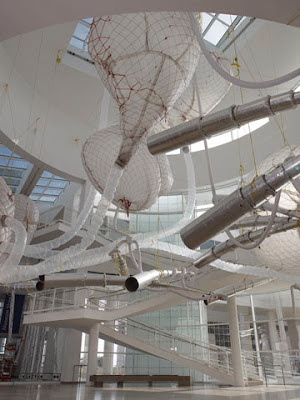 The largest of Hawkinson's work is this hanging organ, a pipe instrument of plastic bags and large metal horns that looks like the white balloons of our body's organs, intestines, liver, kidneys, lungs, all hanging above us in the Ghetty's front lobby. There's a strange sanctity about entering a room of the white counterparts to our red and black insides. Death is white. So is heaven. Is God. In this installation our insides, our very morbid innards float above us as an emblem of working song. Again in his work, the gross of the flesh takes on an air of mystery, beauty, spirituality. The human bag of slop that is the body becomes a totem for divinity, a literal instrument for transcendence, for creating music, the very symbol of our humanity that has struggled, like Odysseus, toward its own godhood, or at least toward being able to define what for a person "godliness" might mean.


I don't know if I'm doing justice here to Rekdal's work, which is one of the most satisfying books I've read. 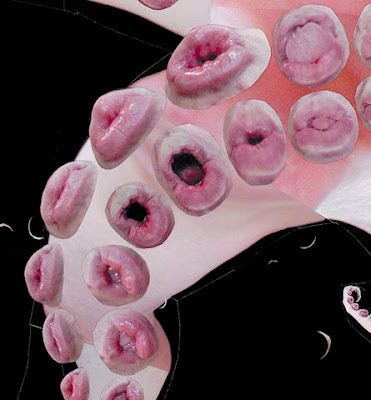 There is no way for me
to avoid the white now;
no method to describe what is truly silent: blankness composed
of pale self hatreds . . .
Still, I want to see if something could be anchored, here
where dark feeds
on dark, wet on wet


More than anything you come away with a feeling that failure is a condition of our love, and that our struggles--with Art and History, with our relationships with lovers and nations, objects and beings in nature--are in turns ecstatic and bewildering, hopeful and sad. Bound as we are to the to body's place in the world, Rekdal sifts the struggles of our identity and witnesses for us as best she can, their imperfect but necessary longing.

I really love Paisley Rekdal's new book of poems, THE INVENTION OF THE KALEIDESCOPE. Big, fat, confessional reveries--glowing odes to art and broken loves, in their variable forms and subject matter: pornography, family, self and fruit. Her lyrics sting, sing, singe the edges until the spirit feels--"deliciously, yet delicately, fired." I'm finding it difficult to write about, because the poems are layered and dramatically centered. Each poem is a "clear song

of the dreamer's reverie--this one note--broken
or turned sweetly inward, romance of self
with self, awareness stirred

This week I'm married to Bjork and The Red Hot Chili Peppers. All horn and sail. California, fog or high knifing green. It's the end of the semester (FINALLY) so I'm split between grading term papers and final exams and dreaming about my re-print which is due out later this month.. . Summer school starts right away, but it's such a relief to feel myself at the end. These semesters feel like they go on forever. My secret May is filled with white turned inside-out, my beautiful hanging entrails, like Hawkinson's song at the Ghetty, UBERORGAN.. .

Here are a few more bits of her gold:

"One day, you'll be half asleep in the dark, listening to a radio
play in another room, and feel yourself
suddenly filling like a jug with the cold
awareness nothing more will ever happen, the disaster
of your old ambivalence, the familiarity
of desire's wolfish teeth sinking into the body.
The body, as if it didn't belong to you anymore."
at 2:22 AM No comments: