I LOVED THE MODERNISTS BUT LATE

On Facebook I was tagged to name 20 books that inspired or influenced me to write poetry.
Can't.
I took this to mean poems from the beginning, that woke something up. That wounded me.
Books is too hard for me, but here's 20 poems I can remember lines from, poems I am sure called to inside me some calling:
--in no order, and with, I'm sure, severe omissions I will regret later--
1. "To Small Frogs Killed on a Highway" James Wright
2. "Carrion Comfort" Gerard Manley Hopkins
3. "Letter In November" Sylvia Plath
4. "Batter My Heart Three Person'd God" John Donne
5. "Death" Federico Garcia Lorca
6. "The Kid" Ai
7. "Lamium" Louise Gluck
8. "To the Black Madonna of Chartres" Jean Valentine
9. "Hamlet" William Shakespeare
10. "Legend" Hart Crane
11. "Les Stupa" Arthur Rimaud
12. "Elegy" David St. John
13. "Herbert White" Frank Bidart
14. "Letter" Larry Levis
15. "The White Fires of Venus" Denis Johnson
16. "The Window" Lynda Hull
17. "Aubade"  Philip Larkin
18. "The Waking" Theodore Roethke
19. "Take Me To the Airport" Yehuda Amichai
20. "Desert Places" Robert Frost
I'll throw in the Book of Job as a floating poem, since I went to church first and memorized those poems first, and surely learned my duende there. . .
and three from my teachers:
"The Good Lunch of Oceans" by Alberto Rios
"The Funeral" by Norman Dubie (but I love "Hummingbirds" more. Shit just read The Springhouse Poems)
"Monsoon" by Beckian Fritz Goldberg
. . . . . .
at 1:23 AM 1 comment:

Well From Which My Name Is Drawn

DISAPPOINTMENT OF THE BRAYLESS THREE

I just read three stolen books, and not one of them is worth their weight in this poem by John Ashberry:
Floating Away
As virtuous men float mildly away
so do our minutes hasten toward the rain,
some speckled, some merely numinous,
and so it goes. The Traveler and his Shadow
find much to concur on. The wreckage of the sky
serves to confirm us in delicious error.
Congratulations on your life
anyway.
Not even doing it
makes up for the loss it guaranteed.
Only a 28-year water supply
shields us from the desert.
Sticker shock awaits plaid gutter boys
pissing out over a stream. Surely if you were
going to count that against him the others would befall too.
That's not what he was saying, Uncle.
We're going to have a friendly chat with him
in the belief that someone will vote for you.
Pleated regret that is easier
by the end of the war inhibits only cats.
Some other holy man was here before
and the eunuchs made much over him.
In the small garden a harmonica was heard braying.
. . . . . . .
at 10:24 PM No comments:

THURSDAY:
The Aphorism: Life Is Short
Union: A Conversation in Poetry
Diverging Lines: Understanding the Evolution of Contemporary Latino Poetry
The City: Real and Imagined
Six Ways of Looking at Stevens
Poetic Responses to AIDS
American Hybrid: The Meeting of Extremes
FRIDAY:
The Poets of the American Hybrid
The Poetry of Thom Gunn
The Academy of American Poets Presents: Frank Bidart and Mary Jo Bang It
A Tribute to a Stranger: Thomas James
SATURDAY:
Art to Art: Ekphrastic Poetry
Prison Poets: Teaching Behind the Razor Wire
Tomaz Salamun Reading
at 10:14 PM No comments:

Email ThisBlogThis!Share to TwitterShare to FacebookShare to Pinterest
Labels: AWP

What I Really Did at AWP, Chicago 09

Draped my black coat over the fast noise and names.
Best Manuscript titles: Cocktails with Hitler, Granny's Taco Needs a Drink and Other Children's Stories, and the Pulitzer prize-winner: Breakfast With A Wet Gun.
A lapdance in Starbucks, or just Starbucks.
Hot chocolate in Kitty O'Shea's. A gay couch. No I am Not a wet dream.
Sean you were my best accomplice. You're going to burn in hell.
In the French Gardens, Lips and I watched the servants interrupt the chandeliers.
My valentine with the breakfast guy, who likes to be peed on. For REALs.
Getting a nibble from Lemon. Pockets full. Eyes full.
Limon has secrets in her rainblack hair. Behave!
Moleface ruins my coffee but hands me his card.
In the bathroom I meet the mouth for later. Later the snow falls on our dream.
I defend the Eyepatch. The Eyepatch and I eat our miseries and then flee.
I text the leathergod, and he says Miguel.
Justice keeps her in line, good morning bitch. Did you sleep well? Good girl.
The books I wanted were already stolen.
If you tell anyone I'll deny it completely.
at 12:35 AM No comments:

Email ThisBlogThis!Share to TwitterShare to FacebookShare to Pinterest
Labels: AWP

DON'T BE MY VALENTINE

So I just got home from AWP, Chicago and opened my print copy. It's truly satisfying. This is a beautiful little collection and to see these poems in print is especially gratifying since I've had to endure some ridiculous criticism. Don't hate ladies. If you didn't bother sending anything in, then shut your hole. I read what was offered and listened to what was offered and turned things down and struggled over editorial suggestions and asked for more and asked for cuts and bled and cried with the worst and best of them, and in the space of my deadline these were my heroes. Not enough big names for you? Too many bloggers for you? Guess you should have passed around the notice. Guess you should have asked your friends and teachers and students to send something. Guess you should have sent something yourself.
In other words, I'm not apologizing. There are some very fine poems here and some very hard-working poets. I'm proud of it, and if you actually read it, you're sure to find a poem or two you like. What can you ask of any book of poems, anyway, except that it give you one or two memorable deaths? 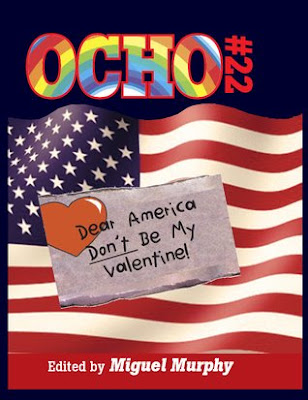