POET AI: Corpses, I Give You These Flowers 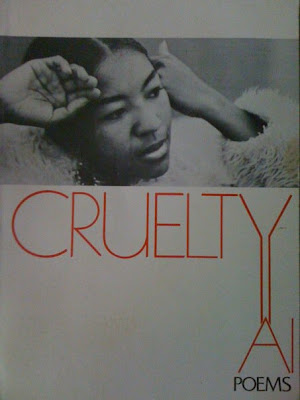 When I was 18 I followed the poet Ai. She was walking across campus in Arizona and though I didn't know who she was, there was something so serious, so attractive about how sure-footed she was, that I instinctively knew I wanted to see where she was going. It is strange to feel so compelled, but there I was, following her on foot off campus and into a strip mall and finally into a small pawn/antique shop where she bent over the jewelry. I was struck by her look, her dramatic black and red outfit, jeans and cowboy boots, her hair pulled tightly over her skull into a dark bun, the large turquoise gleaming on her hands and ears. A figure so obviously of the Southwest desert, I was reminded of my mother, of the witch of my mother's childhood. I wanted so badly to say to her how much I loved her turquoise ring, though that wasn't it. What it is, I still can't say.
It wasn't for two years, until I was in Norman Dubie's office, which is more like a tibetan shrine, filled with smoke and photographs, old postcards, typed poems, dried blossoms, that I recognized her picture. I was in shock, because it was so clear to me that this was the same woman I had followed into the pawn shop, in whose silent peregrination I had been so mesmerized. He laughed, touched his white beard, and told me her real name, which he said she had never liked, and said I should have said hello, that she probably would have liked to have some tea with me.
Several years later she and I danced together at AWP in Palm Springs. She loved Moby. She loved wearing her black leather pants and blood-colored jacket. We struck up a kind of friendship, or at least that's how I will remember it--I was in my early 20's, mad and poor having just moved to the beach, and she had just taken a leave of absence from OSU and moved to San Marcos, Texas, where she held the Mitte Chair in Creative Writing for a year--and we kept in touch over e-mail. She was always brief, direct, her sentences sparing, filled with affection and humor. When my first book was accepted for publication, she wrote simply, "Salud. Miguel." I will always love those two words, for what feels to me like a wine-heavy pleasure. She often wished me regular work and peace with my life, and we talked about the desert, which she missed and loved. Not long after her mother died, our e-mails became intermittent--I didn't know what to say to such a large and frightening loss, I was young and stupid, and we lost touch.
It's hard to say how important she is to me, because our friendship was so private and in some ways, too brief. She was older, accomplished, mysterious, attractive, and a poet! and I was terribly young, naive and ridiculous--Her poems were the first contemporary poems that I liked, for the audacity of their images, the ferocity of their voices, the musicality of their lines, which had for me an echo of the modernists and an unflinching sensibility that always felt thrillingly brave.
I first heard her work in an undergraduate classroom. We were to find a book of poetry and give an oral presentation of it to the class. One of my peers read to us "The Kid", and ever since then I've been her fan. When her last book Dread came out, I paid for it.
Today, finding out that she's passed, I'm quietly, intensely sad. I wish I could send her an e-mail. I wish I could ask her how's life. I wish I could open my mail and see her again.
The Kid
My sister rubs the doll's face in the mud,
then climbs through the truck window.
She ignores me as I walk around it,
hitting the flat tires with an iron rod.
The old man yells for me to help hitch the team,
but I keep walking around the truck, hitting harder,
until my mother calls.
I pick up a rock and throw it at the kitchen window,
but it falls short.
The old man's voice bounces off the air like a ball
I can't lift my leg over.
I stand beside him, waiting, but he doesn't look up
and I squeeze the rod, raise it, his skull splits open.
Mother runs toward us. I stand still,
get her across the spine as she bends over him.
I drop the rod and take the rifle from the house.
Roses are red, violets are blue,
one bullet for the black horse, two for the brown.
They're down quick. I spit, my tongue's bloody;
I've bitten it. I laugh, remember the one out back.
I catch her climbing from the truck, shoot.
The doll lands on the ground with her.
I pick it up, rock it in my arms.
Yeah. I'm Jack. Hogarth's son.
I'm nimble. I'm quick.
In the house, I put on the old man's best suit
and his patent leather shoes.
I pack my mother's satin nightgown
and my sister's doll in the suitcase.
Then I go outside and cross the fields to the highway.
I'm fourteen. I'm a wind from nowhere.
I can break your heart.
. . . . . .
at 10:27 AM 6 comments: