RETURN OF THE NEW STORM 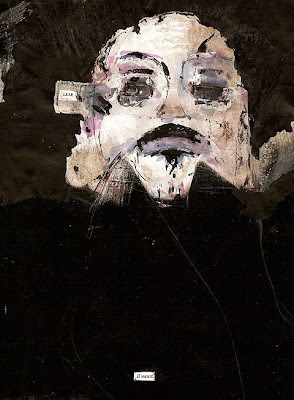 It's eleven thirty at night Friends and Strangers and I'm craving a cup of coffee. It's Friday night and I've got a French film with Isabelle Huppert in it and her two twin sons. Think quiet Cain and Abel meet Freud reading Shakespeare's HAMLET. I also have a stack of books here I'm madly in love with, though I haven't opened them. Bolano anyone? Or Ugresic's MINISTRY OF PAIN , or MY NAME IS RED by Orhan Pamuk? A small novel by A. Bioy Casares, or an essay, something by Batailles, or a chapter from Kristeva's POWERS OF HORROR. Pain, Horror, Beauty--my favorite spectors. It's a wonderful Friday night to be so alone. I haven't been here online in a month. The movement is moonlight, its musical touch and absence. How do all of my days and hours appear like this one drink? Oh speaking of Shakespeare,

(My younger sister--whose marriage I wrote this past summer--called tonight drunk out of her mind, listening to Rufus Wainwright croon some tune to impossible love and asked me what I was doing, how was my week? As soon as I said making coffee, reading, the gunshot of her silence fired! Oh I'm such a dork, so filled with instensity I'm lost to everything, to everyone alive. Why do I worry about it? Relent. What's the line from Rilke's sonnet? "What pains you most? To it assent. If drinking is a bitterness, be wine.") 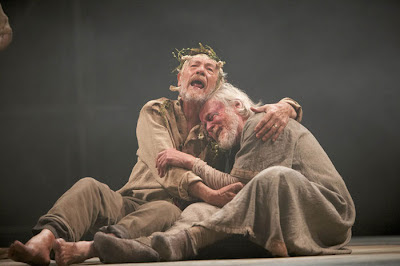 Tuesday night October 23 I went and saw Ian McKellan and the Royal Shakespeare Company play KING LEAR. I couldn't begin to tell you what this night meant for me. Great theater changes you. This night changed me. Its small, unnameable levers pressed, lifted. The locks came unjambed. Something not, was. I lived longer than my oldest moment. I've watched every possible version of this play you can rent, and they all fall flat. Lear's anger with Cordelia in the beginning has always been something I couldn't understand, except mathematically. Except as plot. It's incomprehensible, even when Paul Scofield, or Lawrence Olivier, or James Earl Jones (a version I was hoping great things for) attempt the hurtle of this first scene.

Of course there is the question of nature and fate. The first time I cried in the play is in the scene of Lear's return to dignity, as he realizes himself, and finishes his tantrum: "Is there any cause in nature that makes these hard hearts?" Perhaps this is what we are, filled with dignity and failure and an inability to become either thing fully. Our lives are beautiful and flawed, and we don't get better than we are, and we struggle to know with any kind of real satisfaction, the necessary why of our existence. We cry, he sings to the blinded Gloucester, to know we have come to this great stage of fools.

So here is Ian McKellan each thing: royal, foolish, wise, mistaken, stubborn, divine, weak, angry, noble, transformed, modest, dignified, and failed. In the best sense, I believed in him. In the end of the play I was struck with something I hadn't fully realized before, something I can't fully explain. It's the difference between seeing Goya's sunflowers in a brochure, or online, and seeing them for the first time in a museum. Context--the performance of the thing, the LIFE of the thing--killed me. As Lear lays down his three daughters all in white to die, and Edgar speaks to us at the end--as Trevor Nunn's vision fills the stage with gold and white from above, and shadow and rubble behind, all dressed in a rising organ chord, raised minor--I had a new sense of what it means to feel that a play is cathartic. It's not so much having escaped a devastation, but the dark elation of facing the ruin of what a human life is--our own human life: this is what means that I will live and die, and in my skin know the difficult ardor of navigating one time to an other: "The oldest hath borne most. We who are young shall never see so much or live so long." Our skin will be torn into our secret life, and our failure as a person will marry our great ambition, and we will be beautiful and lost, singing our answerless songs and that, Friends and Strangers, is the sad fucking truth. 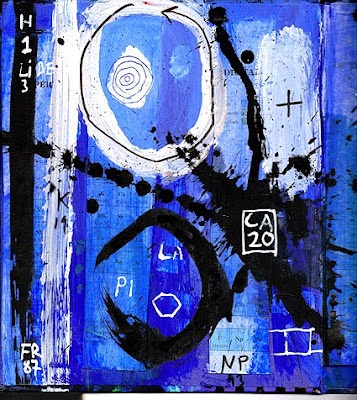 Since my last funeral I've been wearing a thumbprint, a gold leaf with two diamonds melted into it. A kind of amulet. A remembrance, but also a totem against forgetting that we leave here with nothing. What we've made is our brokenness, and this attempt itself is our meaning, our beauty. I think of Mishima and Plath, Crane and Arenas, Hamlet and Ophelia, and their two kinds of suicide. Any philosophy of suicide is divided between feeling and choice. What is bravest, noblest, most honest? Something different for me as the deaths of my two grandfathers. Two visions of being left behind: one grandmother who hasn't forgiven herself and so the world is meaningless ruin. One grandmother who seems to weigh the world with sorrow and laughter, memory and wonder. Which is the more orphan in her frailty? I'm not asking rhetorically. They both look forward as if it were the only past. I'm looking for an enemy but find my beloved. And I know that wearing my nugget of gold feels more Borges than Lowell:

I who am singing these lines today
Will be tomorrow the enigmatic corpse
Who dwells in a realm, magical and barren,
Without a before or an after or a when.
So say the mystics. I say I believe
Myself undeserving of Heaven or Hell,
But make no predictions. Each man's tale
Shifts like the watery forms of Proteus.
What errant labyrinth, what blinding flash
Of splendor and glory shall become my fate
When the end of this adventure presents me with
The curious experience of death?
I want to drink its crystal-pure oblivion,
To be forever; but never to have been.


Friends and Strangers, here is my cup of never, my cup of always, my coffee in the night. Here is my brief letter to you to sail the vast numb harm of the infinite, against which we leave only pieces of who we are, our art and satellite, our artifact, the ruins of a memory, the stage of it glowing still backward in the mind, and this--